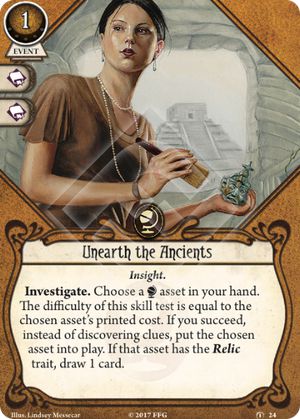 Daisy begins the ritual. She's never attempted it on something this difficult before. It will take all her knowledge to unearth an ancient with this level of power.

She speaks the word of the incantation. The translation had felt nearly impossible to piece together at first. It was mentioned in hushed tones in certain texts, reprinted in partial in others, in Sanskrit here, Sumerian there. Through months of intense study, she had finally reproduced it in full.

A glowing seal appears in the middle of the pentagram she has drawn in the dirt as she mutters the words. A wizened hand breaks through the dust. Then an arm. And finally, the truest sign that she had succeeded in her task, a neckbeard.

Trailing slime as he pulls himself upwards out of the seal, Dr. Milan Christopher grunts. "Hrumph! This better be good. My clan was about to raid the Deadmines, and all our other DPS are shit."

Sure, the other reviews are mostly focused on how this card works as an economy card, and I agree that using it to summon Dr. Milan Christopher makes it the equivalent of a fast Emergency Cache which I think is quite good, but I would like to focus my attention on a very important word in this card's ability: Investigate

This card is an investigate action - and one that lets you control the difficulty. Declare a Magnifying Glass and you are making a difficulty 0 Investigate check. "Okay, but why is that useful?" I hear you ask. "You've just paid a resource, a card, and an action to play a free, fast card!"

Yeah, that would be pretty dumb. But here's the thing. Let's say you're Rex Murphy and commit a Deduction. Now you just need a 2 (-4 or better) to pick up 3 clues from that action.

If you want to be even greedier, have your rogue buddy Double or Nothing. It's still difficulty 0, but now the Deduction offers 4 clues in an action. All sorts of silly shenanigans open up when you can Double or Nothing a difficulty 0 test such as Quick Thinking, but sadly not "Watch this!".

But this isn't just about the action compression, the best part is that you control the difficulty, even on a high shroud location, which could reach 5, or even 6 with an encounter card.

Still don't feel like you need this in a pure seeker? You'd rather just pay for Higher Education and Archaic Glyphs Understandable. This is a low enough level combo that it can still be used by secondary - or even tertiary seekers. Roland Banks can struggle to pick up a bunch of clues off a high shroud location without enemies to take advantage of. Even if you're still using Deduction, you succeed with a -2 to Unearth an Art Student and grab two clues.

Is it still a pretty finicky card? Definitely. Do I think you should auto-include it? Probably not. But open your mind to the possibilities, and keep an eye on this card in the future as more synergies become available. I expect this card to eventually be the center of some pretty silly combos.

Death by Chocolate · 1131
That's a really interesting angle I hadn't considered. Using this to "cheat" clues using deduction and similar effects does make this card into a sort of very convoluted "working a hunch" type card... I don't ever see it being really worth it with the current cardpool, but it's not nothing! — Low_Chance · 6 5/18/18
Doesn't work with Deduction, sadly - Deduction discovers *additional* clues, and thus doesn't combine with effects which replace discovering clues with something else. — TheNameWasTaken · 3 5/18/18
@TheNameWasTaken Hmm, looking at the FAQ entry for Deduction, it appears that you are correct. A pity. It does still work for Rex, and I still think we'll be seeing this card reappear with a silly combo one or two expansion cycles down the line. — Death by Chocolate · 1131 5/19/18
Worth noting that Ursula's reaction ability lets her play this as a fast action. Especially good with its relic synergy. — SGPrometheus · 636 5/31/18
@TheNameWasTaken I disagree. The Investigate action on this card discovered 0 clues. With deduction, you're discovering an additional clue on top of the zero clues discovered. After all, the addition of 1 to 0 equals 1. — GregoryZamuza · 7 3/14/20
Unfortunately, the FAQ for Deduction implies otherwise; base investigation would discover 1 clue, Deduction adds an additional clue to make 2, _then_ Unearth says "ok, instead of discovering those two clues, you're putting an asset into play". Note Unearth's wording of "instead of discovering *clues*", plural. — Tamsk · 1 6/22/20
6

What does this card really do...

For 1 resource, and a sucessful Investigate (X) action you get to play a Seeker asset of cost X for free. If the Seeker asset has the Relic trait you draw a card too.

There are only 3 Seeker asset at this time with the Relic trait.

Doesn't seem worth it, unless you are playing on Easy.

Daerthalus · 8
Most seeker assets are pretty cheap (you don't have to play a relic with it), so it's not really usefull. And there's a chance of failing the test. However it may be useful for expensive off faction cards, like shotgun (roland) or leo de luca (rex murphy), when combined with Higher education, where you basically half the cost. — Django · 4146 5/18/18
This card may have some strange interactions with "comes into play abilities", as it adds a test where cards can be commited. If you play this card naming an "art student" and a "double or nothing" is commited, do you get 2 clues? — Django · 4146 5/18/18
the card can be used only to play seeker assets. the clue from art student is not the effect of the test, and you cannot put the same asset into play twice, since it is not in your hand anymore. — Adny · 1 5/18/18
True, forgot about "seeker assets" only. The card should work for lola if she changes from seeker to another class mid test, as the wording of the asset is "put into play". — Django · 4146 5/18/18
I can't say I'm too impressed with the interactions right now. But maybe there's a Rex/Scavenging/Disc of Itzamna deck to be made here. Probably not. — CaiusDrewart · 2687 5/21/18
I feel like this card and Markings of Isis are almost good, but not quite. The weakness of this one is that it can only play seeker assets, while Markings of Isis requires you to oversucceed by a lot for it to be useful. I suppose having to take a test is kind of inherently bad, but there are a lot of ways to boost yourself to where you have a good chance of succeeding in standard, even without wasting skill cards. Still, probably only useful with Ursula (free investigate action) or Rex (possibility to still get a clue). — Zinjanthropus · 206 3/1/20
3

I tried this card in my pure seeker Ursula Downs deck that focused on mobility. I was playing on STANDARD difficulty. In my experience this card is mediocre or even bad if you plan to use it just to enhance your economy. The problem is that in order for this card to be worth, you have to use it to play a card that costs 4 resources or more, because if not you are just saving 2 resources or even less , which is quite bad considering that Emergency Cache gives you 3 resources without the risk of having to pass a test to get them.

The fact that the only seeker asset that costs 4 is Dr. Milan makes things even worst because you want to have him in play before using Unearth the Ancients, not only because of his reaction ability but specially for his +1 intellect. What I mean is that without Milan's +1 Intellect you are probably just sitting at 5 or 6 intellect at best and this makes passing the 4 investigation test quite a gamble without committing any more resources or cards (which would make playing Unearth the ancients meaningless). This situation gets even worst on Hard or Expert difficulty and if you consider the negative affects of failing a test if you draw the wrong chaos token. This card is therefore almost useless to summon the only asset it would be worth using it for, namely Dr. Milan.

The bonus card if you use it to play a relic is also mediocre, considering that there are not much seeker relics as of now (3 I think) and they cost 3 or less resources.

Some smart player would say: Hey but you can use this card in combination with Ursula Downs ability and the asset Fieldwork to make it worth but the answer will still be this card is bad, because if you play Unearth the Ancients with Ursula's ability you are not getting a free action or making it fast, remember you could have most likely used Ursula's ability to investigate normally, get clues and get closer to victory. Fieldwork is good to have indeed if you are using this card, but having to pull a combo to effectively use a card with a mediocre effect is obviously not worth your time and effort.

You can of course also use this card in combination with Rex Murphy's ability and a cheap asset like Magnifying Glass and even maybe a Double or Nothing to get some free clues in a high shroud location. I personally haven't tried this cheese strategy yet but I think that it isn't great either (and I am not even sure if the rules allow it). It lacks consistency because you need to much conditions to pull it off and there are allot easier ways to investigate in high shrouded locations for seekers.

In conclusion I think it is a pity that such a thematic card has no place in the current meta. I hope that in the future an XP upgrade will make it worth considering.

Alogon · 837
I strongly disagree with most parts of this review. I agree that there are not many good targets for this card, but I think Ursula Downs can make good use of this card. I would skip playing this on Dr. Milan for the reasons you suggested, but with Dr. Milan in play it would be very beneficial to play this on an asset like Tooth of Etzli, Pathfinder or Dr. Elli Horrowitz, basically any asset that costs 3 or more, especially if you are Ursula Downs with Fieldwork. — matt88 · 2534 10/8/18
I will agree with the review, myself--I think this card just isn't worth it. It has a lot of downside for not nearly enough upside over something like Emergency Cache. — CaiusDrewart · 2687 10/9/18
I like economy cards that are better than e.cache. The test kills this one. — Django · 4146 10/10/18
This card would be actually good if it was a skill card (with 2 intellect icons) or if you would also get clues when you use it or if you would always get the draw a card effect. But to be fair the yellow investigators have already a strong card pool and yellow is one of the bests classes, so that boosting their economy too much could make them OP and that wouldn't be good for the game. — Alogon · 837 10/10/18
I’m playing an Ursula deck in TFA that feels very resource hungry (Pathfinders, Fieldworks, Milan, Tooth of Eztli, Trench Coat, etc). To me this feels like decent economy and action economy, especially in your opening hand. In some ways you can think of this as trading intellect pips for resources. An opening hand with Fieldwork or Inquiring Mind and Unearth can be a fun way for Ursula to put out Milan or Pathfinder or the Tooth of Eztli for cheap. Obviously the higher your intellect, the more value there is. Not worth much if your intellect is at 3, but if you’re Daisy with Milan, Death XIII, and a Magnifying Glass, this looks like free money. Also, as I read things, Milan can collect you a resource after the Unearth test that puts him out. That’s another bonus for that setup! — mbooradley · 6 4/24/20
This is the future. The upgrade somehow manages to be even worse than the 0xp verison. My disappointment is immeasurable, and my day is ruined — suika · 8500 9/21/21