- Deal 5 damage to an Ally asset you control.

- Take 1 direct damage. If you are not poisoned, put a set-aside Poisoned weakness into play in your threat area. 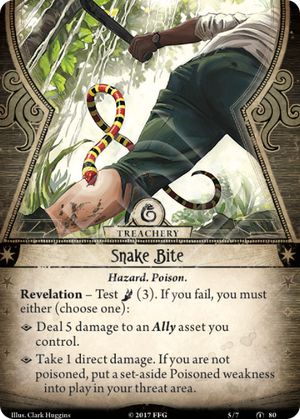 Thanks everyone for the comments! Let me outline the discussion on top for anyone revisiting this card in the future.

If you fail this skill test and would like to choose option #1, then as Zinjanthropus in the comments clarified, the damage is dealt to "an ally" rather than "allies", "you", or "your investigator". And since it specifies one ally, this means (as StyxTBeuford notes) the card is effectively telling you to discard one ally. However, the card does NOT specifically say "discard" even though that's exactly what it wants (although because it is damage, as Hylianpuffball notes, this means you can trigger reaction effects upon death such as Brother Xavier). Do note that you cannot have multiple allies absorb the hit in order to keep them alive either (this is largely impossible anyways). It tripped me up at first because ordinarily, treacheries tell you when they want you to discard (e.g. Crypt Chill). In this case it does not because it sounds scarier, but more importantly, it is more thematically consistent. Someone is getting killed (or severely wounded) from a snake bite. This ally must be able to receive damage though so the incorporeal Guiding Spirit cannot take the blow as SGPrometheus brought up. Django and others point out that in short, when an encounter or other card effect requires you to do something, you can only choose to do it if you are able to meet the request in part. In other words, it has to effect the game state. If it says to lose 3 resources, and you only have 2, you may still choose this option. In our case, when it says to deal 5 damage to an ally, as long as you have an ally with any amount of health, they can take the hit even though the rest of the effect will not amount to much.

I maybe wasn't clear in my original "review" but my intent was to ask the community so that I know to make sure I play the card correctly, and so that others with the same question can now find an answer. As an aside, yes, Agency Backup and Trusted x2 is about the only combination that could have an ally survive this hit, but not for untamed wilds (unless you start with bonus exp somehow). If anyone has dealt 5 damage to an ally and the ally survived, I'd love to hear about it because it sounds epic.

I'm not sure I understand why this card pretends to offer you a choice should you fail.

Dealing 5 damage to an ally means the ally must be able to receive 5 damage (during the assign damage step). If the total incoming damage exceeds the card's maximum health threshold, then the rest needs to be dealt to your investigator (or any other card that can take damage). So my question is, can I choose this first option even if I only have one ally up, say William T. Maleson or Jake Williams, and then stomach the rest on my investigator?

If you can, it's a lot of damage but at least poison can be averted. If you can't, then you'd be forced to choose the second option and suffer poison. But frankly, you'll never be able to choose the first option without having at least 2 allies in play. Why? Because the only allies who offer 4 HP are Agency Backup and Red-Gloved Man, and that still isn't enough to satisfy the requirement. It may not be as big a deal in later scenarios, but if we're talking about Untamed Wilds (which this card is in), then the only investigator who can effectively tank this is Leo Anderson, AFTER he has Mitch Brown AND one or two other allies in play. There is Trusted but it won't be enough. Mateo could soak it in theory since he can spend his bonus EXP on Charisma and two Summoned Hounds, but sheesh. I do feel like the severity for avoiding poison should have some bite, but this is impossible at lvl 0 for anyone but Leo (beyond protecting himself, he can sort of protect someone else with Tetsuo Mori but he didn't release until well after FA) and Mateo (again, only with hounds who did not release until much later). You can buff yourself with some armor, but most lvl 0 options are too minimal to help much.

In short, this card is scary.

LaRoix · 1498
i don't think it's true that excess damage would be dealt to your investigator or other allies. i am basing this on the fact that it specifies "an ally," rather than saying that the damage is dealt to your investigator or "allies" for example. apart from that, generally to satisfy a "must" condition, you only need for the game state to change, you don't need it to deal its full effect. i think it's really just meant to say that you lose an ally or take poison if you can't. also, if you had 2x trusted on Agency Backup, it could survive. — Zinjanthropus · 180 7/24/20
Zinjanthropus is correct; it's essentially lose an ally or get poisoned. Damage dealt to you can be assigned to your allies, and normally you can't assign them overflow damage, but in this case it's the treachery itself that's assigning the damage to your ally. There's no rule that says you have to deal with the excess, because you're not actually taking damage; your ally is. It's not 5 damage hitting you but going through an ally first, it's five damage on the ally, regardless of their stats. That said, I wonder what happens if I target my guiding spirit? My gut says that's illegal, but it is an ally I control. — SGPrometheus · 590 7/24/20
if i had to guess, you can't target Guiding Spirit because it has no health to take damage. if nothing else, it wouldn't change the game state, so probably doesn't fulfill the "must" requirement. — Zinjanthropus · 180 7/24/20
Yeah you have severely misread how this card works. As long as you deal any damage to an ally, you have resolved the card’s effect. So even a 1 health ally able to die to this card fulfills the effect, giving you the actual choice. It is basically “lose an ally with any health value, or get poisoned” — StyxTBeuford · 12541 7/24/20
When you have a choice, only those are valid that change a game state. You can’t choose to discard 3 Ressources If you have 0; you need an least 1. So you can’t target allies without hp with an effect that deals damage. — Django · 3742 7/24/20
@Zinjanthropus Yeah, the fact that it doesn't change the game state was the only reason I could think of that it wouldn't technically work. — SGPrometheus · 590 7/24/20
Another difference between discarding an ally and dealing it damage is that the Ally's "on defeat" stuff will still trigger this way, which doesn't happen on discard. — Hylianpuffball · 11 7/24/20
Oooh, you're right. I'll be sure to add that too then. Thanks! — LaRoix · 1498 7/24/20
It is a pretty mean treachery, but I kind of like it. Poison is really the worst, so I'm glad that there is an option should you either have unsalvageable agility (like Leo), or just get unlucky and pull a tentacle. It does encourage you to bring more allies than you normally would to a first scenario, and preferably ones that are cheap enough that you can always keep one in play. William T. Maleson particular is quite the trooper when it comes to taking Snake Bites. Leo's ability is obviously very useful for this particular treachery. — Zinjanthropus · 180 7/24/20
I agree! And since it encourages allies, it helps create the illusion of a big camp of people going on an expedition. — LaRoix · 1498 7/25/20
that's a good point, very thematic! — Zinjanthropus · 180 7/27/20
0

Teching for this is simple enough, if you can't pass the check — you want cheap disposable allies. Preferably those that can take an Arrow or two. Failing that, bring medicine.

But thematically, what does the choice here represents? You failed an check so you got bitten by a snake and get poisoned, fine. But what does it mean to be able to deal 5 damage to an ally asset instead? Are you something retroactively deciding that an ally got bit instead of you? Is the ally sucking out the poison from you and dying?

suika · 8021
I guess your Ally screams "get down!" and jumps in front of the bullet.. er snake. Jumps in front of the snake. — Soul_Turtle · 1 6/6/21
I like to think that allies (and humanoid enemies) aren't actually defeated when they hit their health/sanity limit... They just withdraw to recover. This helps explain how allies can come back multiple times in a game, and why their soak values are so much lower than the players': Investigators and bosses fight to the death, but allies and minions take time to recover when they're hurt. So the flavor of this is that the ALLY got bit by the snake, and the poison forces them to withdraw and get medicine. — Hylianpuffball · 11 6/10/21
0

edit- Parallel roland only has 0-3 guardian access, which is silly, but this was silly sooo. Guard dog wins with 6/4? :)

I was preparing another run of RT TFA when I saw this card, and what a puzzle it always gives me. It's simple, if you fail, you either get poisoned, or you kill an ally, but it doesn't say, 'discard an ally asset you control' it says 'deal 5 damage to an ally you control.' Which for some reason gets me thinking.

"Is there a way for an ally assets to survive this attack?"

At the time of this treachery cards making? No. But it's been a few years,a few campaigns,a few hundred cards, can we do it now? Let's see.

Now, looking through the cards, what ally asset has the most HP ~quick scan~.....guard dog. This good boy sits at a whooping 3/1! Sanity doesn't matter, but health does. :)

If only there was a way we could start the game with 3 exp.....! Enter -in the thick of it- new shiny from EOTE, for the small,small price of 2 trauma(your choice of which bb) you can start any campaign with 3 exp. Pretty decent. So, sadly only guardians up to lvl 3 (sorry Daniela) can run this

I don't think there IS a way, to start a campaign with 5 xp, we got away with 3, but ~in the thick of it~ is limited to 1 per deck. I wonder, the only investigator I can think of that starts with 5xp is father Mateo. But he can't run most of the guardian cards.....! ~quick scan~ ROLAND coughcough* I'm sorry, I ment Parallel Roland.

He can take all guardian cards, (on top of some tactics/insight) he also starts the campaign with 5 exp! Combined with lovely ~into the thick of it~ he can add trusted, the star, and agency backup, waste a bunch of turns to

-and patiently wait for you to draw snake bite! With all of these cards finally out

If,however, you CAN stack trusted, Parallel roland can run 2, and get agency backUP to the largest amount of health/sanity an ally can have from the very first game.

This was an interesting experience.it may not be exactly a lvl 0 deck, but it is legal....I think. It was very funny to play around with. But to be completely honest.... is it practical?

No,no it isn't. Because to be honest.... Snake Bite! Could of just said 'discard an ally asset you control'

(Also, why does this version of the federal agent NOT have access to agency backup >:( oh well, this was still fun to think about)