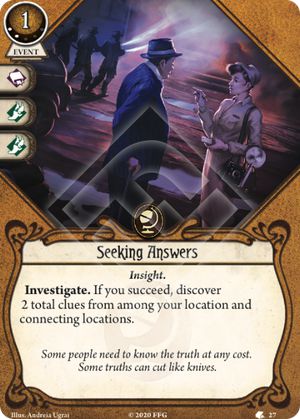 This seems like it would be perfect for Luke Robinson. With Dream-Gate having a shroud of 1 and being connected to every location, this card is essentially pay 1 resource and discover 2 clues from any revealed location. Plus, while it is an event, you don't even need to use his investigator ability on it. Though I guess you would have to lean a bit more by taking St. Hubert's Key over Holy Rosary for instance.

2xp to get a 1-cost Deduction with some frills. The frills being that you can skip moving into the target location, which can save you 2+ actions or even your derriere.

Tsuruki23 · 2324
It's really good for Crystallizer of Dreams Ursula (and probably Trish) with those double agility icons. Ursula can even use her extra action to play it. — Zinjanthropus · 211 10/7/20
1

It's 2 XP. but it's better than Working a Hunch (except in Joe) and less complicated than either version of Extensive Research. The ability to grab clues from more than one location is gold in Solo. It's cheaper than Working a Hunch, and will find a comfortable home in Roland, assuming he isn't spending all his XP on weapons.....

LivefromBenefitSt · 927
It’s not really better than Working a Hunch I dont think, in the hunch deck. You can always just WaH whichever location is more problematic. It is a good hunch though, and is much better than the level 0 version. — StyxTBeuford · 12738 9/7/20
Don't underestimate the power of an actionless, testless clue, especially on higher difficulties. — TheDoc37 · 462 9/8/20
No doubt, it's a good card, though not technically actionless or testless. But the ability to investigate any one location and grab the two most troublesome clues nearby will saves you actions almost always. — StyxTBeuford · 12738 9/9/20
@StyxBeuford I'm pretty sure TheDoc37 was referring to WaH in their comment. — Death by Chocolate · 1229 9/9/20