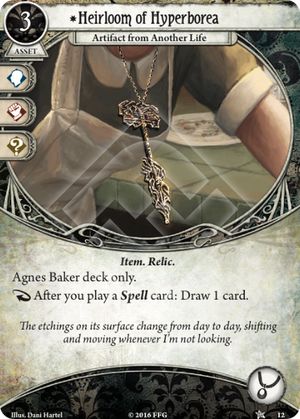 There is a lot to like about Agnes Baker. However, the Heirloom of Hyperborea is not one of those things. In fact, I'd say it's the weakest investigator-specific card in the game.

Think of it this way: you have to spend an action to put the Heirloom into play. It costs three resources. And when you play it, you're giving up a card. How many cards does it have to draw to start before it generates real value above and beyond that 3-resource, 1-action, 1-card investment? I would say about six. Are you really going to play six spells over the course of the game? Even as Agnes, I would say that's a tall order. Bear in mind that several Agnes staples like Drawn to the Flame and Forbidden Knowledge do NOT have the spell keyword.

Moreover, playing the Heirloom will massively slow you down in the early game. Agnes has more strong assets she needs to get into play early than any other investigator. There's Shrivelling, of course, and Agnes really wants Peter Sylvestre as well. She probably needs Rite of Seeking or Flashlight to do some investigation, and lots of Agnes builds use further things like Fire Axe and Ritual Candles, among others. Can she really afford to invest critical early-game time and resources into a card that might, if everything breaks right, turn a very small profit over the course of the game? (But more probably will end up in the red?)

The Heirloom's effect only gets worse if it's drawn later in the game. If it's not played in the first couple turns, it has basically zero chance of paying back its cost.

It also eats up an Accessory slot, which is inconvenient because Holy Rosary is typically more powerful for Agnes.

Of course, the Heirloom is by no means a crippling thing for Agnes to have in her deck. She just uses it for +2 to a Strength or Will test. But all the other investigator-specific cards are at least occasionally worth actually playing. (Daisy's is a little borderline, but you can imagine scenarios where it would be worthwhile.) Agnes's is basically only skill test fodder.

CaiusDrewart · 2741
Agreed. Better used for its skill icons, even if drawn early. Used as such, it could work well with Scavenging--since it's an Item--for a re-usable +2 Willpower or Combat. — Herumen · 1632 8/21/17
Agreed too! The Spells themselves are rather expensive, and Mystics resources are not so frequent you would want to spend 3 resources just hoping to draw a couple of cards in a game. Basically, if you don't draw it in your opening hand, it's useless. It's always 2 skill icons to commit to a test though. Moreover, playing the thing fill in the Accessory slot, and there are much better option for this slot, starting with Holy Rosary. — banania · 373 8/25/17
Holy rosary is so far superior, it's the death knell for this card. You can usually tell a veteran Agnes player by whether they include Holy Rosary or not. — Low_Chance · 6 4/27/18
I used to feel guilty for not playing it, opting instead of Holy Rosary (and now Moonstone). But yes, if I'm going to spend 3 resources in a Mystic Deck, the effect better be great, and it better not have the potential to draw what's arguably the worst weakness in the entire game. — LaRoix · 1580 4/27/20
6

With so much time having gone by since the release of this card, I thought it might be time for a re-appraisal. While I still think it's fairly weak, as far as signature cards go, the card pool has expanded vastly since the Core Set, giving this card a total of 20 spells to work with (including her weakness). Let's take a look at how likely it is to play six spells over the course of a game nowadays.

Very beneficial to Agnes is the fact that many newer spell events are fast. For instance, Aggy gets a free draw from Hypnotic Gaze, Ward of Protection, Mind Wipe, Counterspell and Time Warp. All of these are perfectly reasonable includes for Agnes, so her odds of getting a double benefit from them are good. In the same vein, many spell events take actions that you might be taking anyway, giving you another double benefit situation with her necklace out. These include Astral Travel, Bind Monster, Blinding Light and Storm of Spirits. Uncage the Soul isn't a spell, but it does put spells into play very cheaply for Agnes, so in a way it triggers the amulet. Getting a free draw for playing spells even makes some sub-par includes like Alchemical Transmutation and Recharge more attractive, since she gets the draw even if the spell fails. Running a doom-heavy deck? Moonlight Ritual is a spell! Free draws!

With the variety of spells necessary for this to be decent in place, we come to the other problem with the card: that darn accessory slot. While Holy Rosary is obviously terrific for Agnes, she has other options to bring her up to six at level 0; specifically David Renfield. I'm not saying she shouldn't run the Rosary; it's incredible on her. But I do think the Heirloom has enough triggers in the game now that it is competitive for the slot, and makes Relic Hunter a very tempting include for her.

Are all the problems solved? Is it worth playing late? Is it as good as Zoey's Cross? Absolutely not, but I think it's a much harder decision now whether to mulligan it out of the starting hand or play it first turn over Rosary. In a deck that's built around having spells to play, which is totally realistic now, it would be a very powerful card.

Spells continue to be released, and they can only make this more powerful.

SGPrometheus · 646
Hilariously Time Warp doesn’t work with the heirloom because the reaction trigger is ‘after you play’ a spell, but after you play Time Warp, the game state reverts to before the action - which Is a game state that is NOT immediately after a spell was played. That said, still a great card she might want to run. — Death by Chocolate · 1171 6/15/18
I don't think that's correct; Time Warp completely resolves first (resetting the action), THEN you get the opportunity to react to it being played. You wouldn't draw the card from playing Shriveling until after Shriveling was in play and has resolved; Time Warp is confusing, but the same. At least, I'm pretty sure it's not like in Magic where you can respond to the spell being played, but before it resolves. In either case, Time Warp resets the game state to how it was before THAT action; Time Warp isn't that action, so our response to it is not inside its purview. — SGPrometheus · 646 6/15/18
@DeathbyChocolate If you read the last bullet of the FAQ for Time Warp, it says that Time Warp is still "being played while you are resetting things," so we definitely can't respond to it with the amulet until after everything's reset, since it hasn't been played yet. — SGPrometheus · 646 6/15/18
I do agree that Uncage the Soul was a big help to this card. It's now much easier to play this on turn 1 without cripplingly slowing the rest of your setup. Still, the overall rewards from this card are probably going to be pretty modest even now. — CaiusDrewart · 2741 6/15/18
Backpack helps you locate this card — Django · 4207 6/15/18
Django: But would most Agnes-decks have enough items to make Backpack worth it..? — olahren · 2004 6/15/18
@caiusdrewart You might be right; I tried building a really spell-heavy Agnes deck on here but it felt pretty sub-par, especially if you never saw the amulet (since it's a one-of). — SGPrometheus · 646 6/15/18
olahren: That's not the point and not a good idea. Backpack can help you locate a single card, even if you waste the rest of it's effect. Her amulet wants spells not items. Not sure if you could built a mystic deck around items at all, to make real use of backpack.. — Django · 4207 6/18/18
I think the addition of Mists of R'lyeh and Shards of the Void has also helped to solidy this card. Sacrifice interacts with this card in a weird way - it's easier to play more spells because you have more resources, but you can't discard this card with Sacrifice and this card can result in you reaching a saturation point where you just don't need more card draw because all that does is cycle cards in your hand. — Katsue · 9 12/16/18
"Getting a free draw for playing spells even makes some sub-par includes like Alchemical Transmutation and Recharge more attractive" - I'm sorry but no, it does not. Having two cards that can combo of each other does not mean automatically mean that the combo is good or warrants investment, and you always have to take into account that you may not have the pieces for your combo, meaning that each card must have an intrinseque value (except if the combo is so OP that it would win the game by itself, but this is not the case). It is NEVER a good idea to include sub-par cards in your deck (and mind that they are taking slots for cards that could ACTUALLY be useful), especially not for a pretty weak combo on the chance thay maybe you might get 1 free draw. Oh and by the way, that draw is not actually free, because you still have to play the spell (1 action) and its cost (1 resource for Alchemical Transmutation). Sooooooooo basically, you'd be better off just using the Draw action instead of playing any of these cards. — Alleria · 106 7/9/19
@alleria Oh yeah, those cards are still really bad. "More attractive" isn't "auto-include," far from it; but if you think those spells are interesting and want to chuck them in for funsies, good news; they suck less! Furthermore (and unrelated), TCU introduced a whole swath of spell cards that make this a pretty crazy engine. — SGPrometheus · 646 3/23/20
the Dream Eaters spell events probably make this even better now. you could build a spell event focused deck and use this to help refill your hand with said events — Zinjanthropus · 208 7/18/20
Also combos with Dayana. — Zinjanthropus · 208 11/12/20