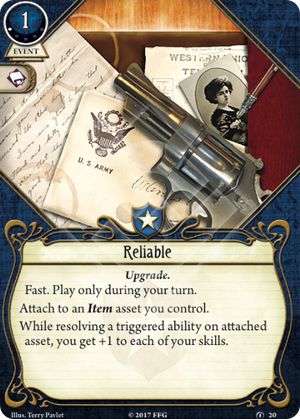 This looks like an excellent Guardian upgrade. It's kind of similar to Magnifying Glass, in that it costs 1 resource, is Fast, and gives you +1 to your staple action for the rest of the game. That's great. Assuming you play this pretty early, it's going to way outshine what a skill card could accomplish.

The best use of this card, of course, is going to be sticking it on a Machete. That's the best level 0 Guardian weapon, and it works particularly well with Reliable since you can use Machete all game long, provided that the encounter deck doesn't discard it (something you should have been taking precautions against anyway). A multiplayer Guardian who specializes in monster killing (that is to say, most Guardians) can easily use a single Machete 10 times or more over the course of a scenario. That's a lot of value for 1 XP. If you don't draw your Machete, Reliable is also pretty good with the .32 Colt, or, for Skids and Leo, Switchblade II.

The doubled to-hit bonus is much appreciated on high levels. On Expert, you really want to consistently hit +4 (or sometimes +5) on your Combat checks. Prior to this card, that was quite difficult for most Guardians to reach. Now, it should be much more easily achievable. For Skids, who needs to overcome a mediocre base 3 Combat, this is an even bigger boon.

The fact that Reliable gives you a bonus to all skills, instead of just whatever you're testing, is intriguing. As the card pool currently stands, I don't think this really matters for any card except Lockpicks. But it's something to keep in mind as new assets come out.

CaiusDrewart · 2749
Does this work on machete? it says triggered ability only — jemwong · 84 5/14/18
Yes, there are three different types of triggered abilities: free, reaction and action triggered abilities. Machetes ability is an action triggered one. — Csys · 1 5/14/18
I think Lockpicks + Reliable will be really handy with a solo Leo deck. It bumps his investigation ability 6, and you can keep refilling them with Venturer. For multiplayer Leo, I think Flashlights work better. — Wyndam · 14 5/14/18
Whoops, I was thinking of reaction triggered abilities only for some reason. — jemwong · 84 5/14/18
An interesting interaction is with Shotgun, as the +1 to fight would also amount to a +1 to damage as well. — Ghostpilot · 1 5/21/18
Does this stack? 2 Reliable for +2? — Late · 1 7/5/18
I would think it does stack - not unique, no limitations printed on the card, and I don't think there is anything in the FAQ about the number of upgrades something can have. — Twitch_City · 11 7/5/18
This card with lockpicks gives you +2 to investigate, because lockpicks uses agility and intelligence. — Bernat · 132 9/18/18
Can anyone please clarify to me if reliable is working with lucky dice? i think reliable should boost the actual skilltest, if you draw a new token with lucky dice — Charles Dexter Ward · 504 9/21/18
With two of these attached to a Lockpicks, Skids can investigate at 11. If you're using Machetes or **Switchblades in your deck you have somewhere else to plant them if Lockpicks doesnt show up. — kitkats · 1 9/30/18
What's the ruling for attaching Reliable to Sophie in a Mark deck? Does the +1 from reliable carry forward to +2 from Sophie for the skill test? — Gyara2020 · 1 10/22/18
Lucky Dice triggers and is resolved during step 3 of Skill test timing, so by the time you get to the step where you determine your total, the bonus from reliable would have faded. Sophie triggers and resolved immediately, even though she has a lasting effect. Again, the bonus from reliable would be gone by the time Skill total is checked. Reliable mostly works for abilities that fully contain skill tests dice the ability is in the process of resolving throughout it. — Death by Chocolate · 1197 10/26/18
Works as +2 for Time Worn Brand's once per game as well — petercheungjr · 1 5/7/20
3

Does this card work with Lola Hayes, when she's not in guardian? This cards ability has no so i think it's a constant effect and works.

If it works, could be a combo with Otherworldly Compass, Lantern or Lockpicks.

I noticed that in the comments section, a few people have asked/speculated whether 2 copies of Reliable can be attached to one item (ex: a Weapon + Reliable + Reliable). I figured I would ask the question in the Reviews section, so that it's clear for future readers.

Can you double-stack Reliable on one item?

This card approaches taboo level for the cyclopean hammer. Being able to have +4 (each copy gives +1 to each stat, i.e. boosts both might and will, since hammer uses both) to your combined stat of will and might is ridiculous and will even have 'unbuffed' guardians testing at a 10+. I pretty much consider this a standard upgrade anytime you're running a hammer build.

drjones87 · 65
Is the problem Reliable, or is the problem the hammer? — Trady · 117 5/2/22
Hammer would still be bonkers without this card and puts a ceiling on any passive buff guardians can get, which is a problem because passive buffs are a huge part of guardian's identity. No way this gets the nerf and not hammer. — dezzmont · 128 5/2/22
Eh... I think people are way too eager to call for tabooing. When you are using half your XP for a campaign and a quarter of your deck to do one thing, it really ought to be spectacular. — LivefromBenefitSt · 910 5/2/22
The hammer is the problem - leave good ol' Reliable out of it! — snacc · 795 5/4/22
0

There is a neat little trick combining this card with Eye of the Djinn to get a based skill test +6 (two copies to get +7) once per term using Eye of the Djinn's ability. The three investigators who can make use of this combo Tony Morgan, "Skids" O'Toole, Leo Anderson will all appreciate it.

-- Update: after checking with Fantasy Flight AHC about the ruling. The combo unfortunately does not work.

This is what Fantasy Flight wrote:

liwl0115 · 33
This combo doesn't work due to timing of the ability of the eye. The last sentence of reliable say you get its bouns while you perform the ability. The ability of the eye says set a base skill on 5. If this is done you lose the bonus of reliable since the ability of the eye is performed and you just have to test with 5. — Tharzax · 1 5/7/22
I don't think it works, but for a different reason than Tharzax listed. Eye of the Djinn isn't where the skill test is triggered... It's just something you can do in response to a test starting. The duration where Reliable would apply only lasts as long as it takes the Eye to set your skill value. For a fleeting moment you have a value of 6... then Eye finishes resolving, and Reliable turns off. — Hylianpuffball · 20 5/7/22
Though honestly, it's a pretty confusing case and I'm not sure of the exact ruling. What is the true duration of EotD's resolution? It's clearly started when a test begins, but does it last all the way through step 5 of the test? I don't believe so, but I couldn't tell you the exact step where it ends; I'd believe either step 1 or 4. — Hylianpuffball · 20 5/7/22
I read it as when EotD's reaction triggered abilities got triggered, Reliable's +1 would apply- since it says "While resolving a 'triggered ability' on attached asset, you get +1 to each of your skills". The application of Reliable is not necessarily predicated on the skill test timing — liwl0115 · 33 5/7/22
There is also the if sentence with bless/curse tokens, which are part of the ability. But even then in my opinion all aspects of the ability would be performed before determining the success of the test, where the bonus of reliable count. — Tharzax · 1 5/8/22