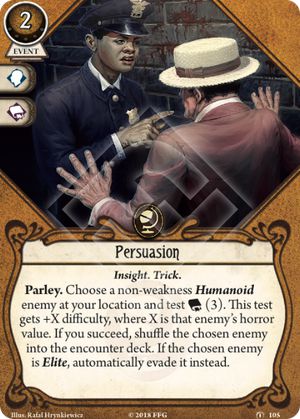 It's hard to see what makes this card cool, so lets highlight a few cool things about this card.

Finally, if you are familiar with the campaigns, your current campaign choice will impact the effectiveness of this card. The following phrases will spoil the humanoid amounts in the campaigns so stop reading at this point if you want to avoid that spoiler:

Core set this thing will be helpful in every scenario. Ghouls are Humanoids.

In Dunwick its very bad, useful mostly in the club, there will be targets here and there but in 4 out of 8 scenarios playing this will be hard or impossible.

It's very good in Carcosa, all of the scenarios have humanoid enemies (often in large numbers) or guaranteed valid targets.

Forgotten age isn't over yet but out of 4 scenarios every scenario has been chock-full of humanoids. Considering the particulars of the enemies in the Deluxe pack there won't be a single Forgotten age scenario without a Humanoid target (Snake people are humanoids!).

Finally, this is a parley action, thus Fine Clothes will go a long way to make these tests outright easy, although perhaps if you're playing Norman Withers or Daisy Walker you wont really have any trouble anyway. Still worth considering, especially in Carcosa.

Tsuruki23 · 2256
Based on my own foibles in Forgotten Age, I think this could be useful for enemy management in solo when you are playing as someone who sucks at fighting. Especially for enemies with doom. haven't tested, though. — Zinjanthropus · 208 3/9/20
3

I really want to like this card in a Carolyn Fern deck for the theme alone - and the fact that she can't play any weapons level 1+ and is so good at getting clues. But I feel a bit bad about putting an enemy back in the deck, and in some campaigns there aren't a lot of humanoids. I'll start with it in the deck but have a feeling it will go pretty quickly once the fighter types in the group get amped up.

Krysmopompas · 290
If you're dealing with lots of humanoid enemies (like in TCU), use handcuffs instead. It's a permanent solution that works pretty well with witches and cultists. However Carolyn doen't have the fight value for it. — Django · 4207 10/21/19
Put some Fine Clothes on to reduce difficulty and you can send aloof archers back into the jungle or nasty witches. Never tried it myself but seems useful for some scenarios. — Ezhaeu · 43 10/24/19
Yeah I love the Fine Clothes combo, but in a 4-player game (which I'm playing now) and at least 2 big fighters, this card went down the priority scale. I think it would be great solo or in 2 player, for a longer amount of time. — Krysmopompas · 290 11/18/19
2

I’m on a solo trip to the jungle with Dapper-Harvey right now. His fine clothes, alongside this card, has gotten us out of many a tight spot with inquisitive Brood of Yigs. Together with Crafty it gets even better.

Might take some persuasion to get this into my deck right now.

This card is kind of in a weird spot, but it fills a very narrow niche for Seekers with a low(ish) evade value. Norman and Daisy in particular might consider this.

Also, all of the scenarios thus far have SOME humanoids and a few of them can be a big annoyance for guardians who might be busy elsewhere.

But lets be real, Mind Over Matter does almost the exact same thing but it can also let you FIGHT.

For now, I think it will need other support to be worth it, but it should be a lot of fun to Persuade the Ghoul Priest to just lay down for a round.

There are a few scenarios in TCU where you go to a nice party. Persuasion would be very nice, especially if you can’t meet the parameters to deal with the guests.

There are some edge cases where there is more use to this thing vs mind over matter; since it’s a parlay that evades an elite enemy, it won’t trigger alert. And it can do it with an enemy at your location, even if you’re not engaged. As the seeker, you’re probably not bailing people out of trouble all the time, but they’ll be super glad when you do.

An intriguing typo is that this works on humanoids, not humans. Weird fish creatures? Perfectly fine. Mobsters? Maybe not.