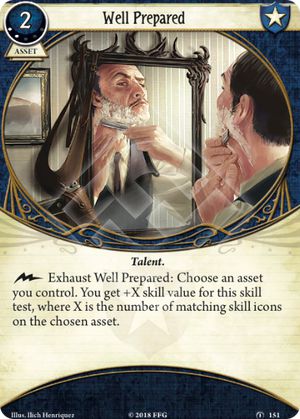 If you can set yourself up with a good target then Well Prepared is great!

With some XP in hand you can combo with Physical Training to become very strong in combat and resilient to treacheries, a thing can be said for Wild icon assets even if its just the single icon (Rabbit's Foot for example, many unique investigator and story assets would be incredibly powerful as well, or just the classic ol' Elder Sign Amulet.

To make Well Prepared worth it I think you need a deck with 3+ cards to reliably trigger 2+ icons off (or a wild icon), that will often mean that you're fine off with just Physical Training and 1+ unique/wild cards.

Update: Just to reinforce this review:

This is a fantastic card when you can get the multi-token triggers, but, it suffers from set-up issues Once the pieces are out, especially once you got multiples of this thing down, you can succeed on all kinds of checks with ease. The more cards that you can benefit from and the more draw power you have the better. Also, the more varied your valid targets are the better, if you play a character to who damage and horror tends to stick (reads: Most characters)) then your targets to trigger Well Prepared with might as well be Bulletproof Vest and/or Elder Sign Amulet, both of which have icons.

Roland Banks with his Roland's .38 Special will actually find good use for Well Prepared, not just for +2 effective icons but also for the +2 icons and the icon in general.

Zoey's Cross is a terrific target, an effective +3 is crazy and then there'S the icon.

Mitch Brown, Leo Anderson's ally is single-handedly a card that makes Well Prepared worth it. A +2 to anything once per round is sure to make a difference.

Whichever of these character strengths you have, Physical Training is the perfect supplement to the build, aside from being a potential trigger for Well Prepared it also lets you bridge the gap to get maximum hit chance on important tests. Well Prepared is always ready to go during the mythos phase which means that you can tap Physical Training for +2 everytime you find yourself up against a crippling treachery.

As a capstone to this type of build I must bring up Ever Vigilant + Stick to the Plan, it shrinks the deck and makes finding everything easier and then it fuels you by granting extra resources and saving actions.

The most expensive blank card in the game, following the recent ruling on Lonnie Ritter we can now undeniably say that this card is blank, since your choice of an asset MUST affect the asset in a game state sense that is impossible to achieve with this card.

The serious point here is either the FAQ needs to be larger or smaller, half answers to rules questions are worse than just stating rules should be followed consistently by each player, the actual minutia of what is technically legal is IMO less important than just ruling all interaction the same way for your playgroup. (but if they want to go the MTG route and have a rule book the size of a dictionary that would at least solve ambiguity, just not the path I'd choose)

What about the card above, well if it isn't just a blank card then it's pretty amazing, try it with a chainsaw or big gun and have fun wrecking everything's face.

Sidenote: most story assets have absurd icons, so if someones well prepared they also might be the best guard for any story allies you want to keep nice and safe.

Zerogrim · 64
I don't think this conclusion is correct. For Lonnie, you have to choose a target for which the resolution can be completed (ie it has to have a horror on it in order to heal a horror). For Well Prepared, any asset is a viable target because there is no required resolution (other than, I guess, it having some icons on it) — acotgreave · 43 12/19/20
Gotta agree with @acotgreave here, especially since that interpretation allows things to, y'know, work. — SGPrometheus · 339 12/19/20
Yeah as far as I know that game state rule only applies to things that could affect the game state. If it can, it has to. This can't under any circumstance so that rule doesn't apply- it just works. — StyxTBeuford · 12054 12/19/20
This review really belongs on Lonnie, but Zerogrim is right by RAW (see her FAQ for the reasoning why). However, since this is obviously silly, they should probably just change the rule to say a target is valid if it would modify the game state overall, instead of requiring the target's state to be modified, and then putting errata on Lonnie. — Hylianpuffball · 10 12/19/20
The first three comments are right in that that is how any sensible person should play the game, and wrong in that it is unambiguously not what the rules of AH:TCG as they currently stand say; which IS the first part of Zerogrim's point. He's saying: since we still need to subjectively interpret the rules, all the pernickety rulings and details aren’t as helpful as they should be. I’m not sure I agree that it would be best for the game to shrink the FAQ, but I certainly see where Zerogrim’s coming from. -- Also, with noting that Mitch Brown and Foolishness have excellent ?? icons. — Spritz · 56 12/19/20
Disagree. The rules also say that the text on the card can contradict the text in the rules reference guide. This text chooses a target and never changes that target's state, so it contradicts and overrides the RRG. Lonnie chooses a target and attempts to heal a damage from it, and therefore doesn't contradict the RRG, and doesn't override the conventional choosing a target rule — NarkasisBroon · 1 12/20/20
Yea these little nitpicky interpretation are at the end of the day just kinda worthless wastes of time, that's kind of my whole point. The rules state that contradictions are handled by the cards trumping the rules but well prepared doesn't contradict the rules, it simply requires you to ignore the rule to function, a contradiction would be a card that allows you to discard weaknesses from your hand. (even though that is against the rules in normal situations) — Zerogrim · 64 12/20/20
You can't exhaust "Well Prepared" if you don't controll an asset with matching icons to the current test. But if you do, you have a valid target. The triggered ablity targets a skill test. And for that, the game state is clearly altered if you activate the card. It's a very different case than with Lonnie, who can't heal damage from a card without damage. This review is rubbish. — Susumu · 6 12/21/20
The rules about "targeting" make it clear that it's the object of the verb "choose" that's the "target" of the card, though. When a card says "this skill test" it isn't establishing a target, it's establishing a duration. — Thatwasademo · 32 12/21/20
I think the actual problem with this analysis is what "changing the target's game state" means. Obviously moving a card to another zone, placing tokens on it, or rotating it (either exhaustwise or facewise) is changing its state, but you could also argue that making a change to parts of the game state not otherwise obviously associated with a card, *based on the target's characteristics*, also counts? Under that definition, the set of legal targets for Well Prepared's triggered ability is nonzero but also not everything -- it's those assets, and only those assets, which have at least one matching skill icon. — Thatwasademo · 32 12/21/20
Of course, that would true in this case anyway even without the targeting rules, since adding to your skill value is the only effect of the ability, and you can't trigger an ability that doesn't change the game state at all even if it doesn't target. But say you added text like "and place one resource token on Well Prepared, as a charge" to the ability. — Thatwasademo · 32 12/21/20
One could argue that the Golden Rule allows Well Prepared to function in spite of the targeting rule — and likewise for other cards which don't "affect" the card they "target", such as Call of the Unknown, Eavesdrop, Interrogate, Knowledge is Power, Esoteric Atlas (unless moving to a location is considered to "affect" it), Sixth Sense (unless investigating as if at a location is considered to "affect" it), Pendant of the Queen (unless any of those effects are considered to affect the location?), Followed (unless suppressing AoO "affects" an enemy), Otherworld Codex, Lucid Dreaming, Trish Scarborough's elder sign effect, Dynamite Blast. — Yenreb · 9 12/21/20
But that's a pretty long list of cards to lean on a rule that shouldn't be used so heavily to overwrite another rule that's so specific to a keyword which, if the cards "tried" to "affect" their targets, clearly would apply (and thus the Golden Rule wouldn't). — Yenreb · 9 12/21/20
While it is only implied, the rule talks about abilities, that affect their target. It is common sense, that if an ability isn't supposed to affect it's target, it is not required to change it's game state. — Adny · 1 12/22/20
Yeah, I think the response on Lonnie is just clumsily worded. It probably means "if the resolution of that ability's effect [would apply an effect but] could not change the target's state"; I suspect they'll release a clarification when they update the official FAQ. — pneuma08 · 24 12/23/20
1

Not a card to aim for early but it can be a very interesting skill test boost . It s even more efficient with the 4 icon talent from the night of the zealot reboot.

Susu · 28
This works with wild icons, correct? (Cf. Yaotl, which specifically excludes them--this doesn't have that language.) Not bad with signature assets, then, which tend to have a lot of those. Not that you can count on drawing those. — CaiusDrewart · 2234 7/23/18
Shotgun and Typewriter (Skids) are also a cool targets. Signature assets mentioned above are also a good choice, Zoey and Leo will like it a lot. From official FAQ: "A Wild ( ? ) skill icon on a player card may be used to match any other skill icon for the purposes of both card abilities and counting how many matching icons are committed to a skill test. When using Wild icons for the purpose of resolving a card ability, a player must state which icon the Wild is matching at the time the card is used. Wild icons committed to a skill test are considered “matching” icons for the purposes of card abilities." - so I would say: yes. Yaotl is a good example: if his ability specifically excludes wild icons then it breaks a general rule. — KptMarchewa · 1 7/24/18
Good insurance against treacheries with Dig Deep (2). — crymoricus · 207 1/7/19
The fact that this card can add the wild icons from assets is just huge. I guess I'm thinking of Zoey in particular, getting +3 combat to a Shotgun blast is killer. At that point, it really does compete with Lightning Gun or simply by targeting shotgun itself since you're literally going in with the same amount of combat but a much greater damage potential. — LaRoix · 1409 6/2/20