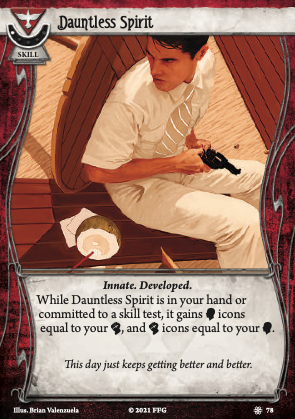 This card, along with Survey the Area, Defensive Stance, and Occult Theory forms a cycle of cards that boost two of your skills (Savant is a different breed, but is the Rogue 1XP version). The two skills are the ones that the Edge of the Earth investigators have a 4 and 5 base skill in (Lily excepting), so for those investigators specifically, these cards boost those skills to a modified skill of 9 (without any other modifiers in play). Number big! Why would you want to pay an XP for such a big number, when Unexpected Courage usually puts you in a good position to pass a test, or you want the draw off of Guts?

Because these skills only modify two skills, they also draw comparisons to Curiosity, Able Bodied, Steadfast, and Cunning. The classes and skills don't exactly match up to this cycle, but the main draw with those is that they are at 0 XP. This cycle needs to work at 1 XP because of the unusual deck-building requirements of the EOTE investigators. For other investigators, whether or not they want them is a case-by-case analysis. They're worth a look because you'd be paying 1 XP to put in a Level 0 card anyways if you really needed the skill boost. But most other investigators are not regularly testing two stats, nor do they need to boost them quite so high. 1 XP cards are tricky because the deck slot itself is extremely valuable, and you'd rather fill it with something that helps you do more than pass a single test. Plus, for another XP, you can test your class's main stat with the Overpower (2) cycle, and draw cards to boot.

I've written this review for Dauntless Spirit specifically because it boosts , which is always useful. It's Innate and a card, so it's easy to pick back up again. Many investigators should take a look, but I think Silas Marsh will make the most use out of it, giving him 6 for a treachery to avoid horror, but note that he can't pick it up with his effect.

dscarpac · 87
Commit resourceful to get it back with Silas. — MrGoldbee · 1297 1/6/22
Played it in a Minh deck with Strange solution: Acidic ichor and later added the pair of Brute forces. She was quite the fighter by the end of the campaign. Very fun deck to play! — Skrattmas · 8 4/1/22