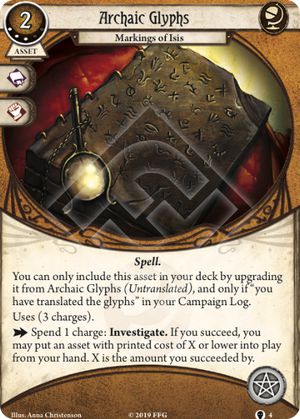 I like the concept of this card; playing an asset by performing an investigate test. It's a similar concept to Unearth the Ancients. Like Unearth, however, this card doesn't seem worth the deck slot (actually probably even moreso given that it's an xp card and is competing with two other types of Archaic Glyphs). It's bad in different ways than Unearth, though.

The main issue with it (apart from just the fact that you have to take a test, which is, to be fair, kind of just part of the game) is that you have to over-succeed in order to not waste your charge. Because you probably aren't going to want to use it to play an asset with cost≤2, this means that you need to beat the shroud by 3. That means that you probably need to get your to be like 6 above the shroud if you want to have a decent chance of being able to play a card. Apart from some Key of Ys double Magnifying Glass Death • XIII type of situation (I've been there, it's awesome), this means you'll probably need to commit something unless you're investigating a 1 or 2 shroud location. My feeling is that you don't want to waste precious icons on something like that that you might even still fail if you pull a -4 or

Other issues with it are its install cost, which isn't that bad (it's only a 2 cost asset, and uses the less contested (for seekers) arcane slot) but is still of dubious worth even if it you didn't have to over-succeed. There's a reason why so few decks run Unearth.

It also costs 3xp and competes with the two other versions of Glyphs, as I mentioned earlier. Both of those cards are actually really good (I think, anyway).

Some of the pluses of the card are that it can play an asset from any faction (not just like the aforementioned Unearth the Ancients. It also isn't a replacement effect, AFAICT, so you still get a clue for your investigation, which would give it a lot of action economy potential if it didn't suck so much (Both other versions of Glyphs are very efficient cards).

It also is an investigate action, meaning that it can be used with Ursula's ability. It also could trigger Rex's ability.

It kind of makes me wish there was some kind of reverse taboo list that aimed to make cards with cool concepts more actually playable. My recommendation would be that it allows you to put an asset into play with cost=shroud (though maybe that would be considered too powerful?). I would definitely play it then. Well, maybe anyway. The other two versions of Archaic Glyphs are still probably better most of the time, so it would probably depend on the deck, number of players, scenario, investigator, etc.

Zinjanthropus · 97
I think the issue is less the fact that you have to succeed by X amount (after all if you don’t succeed by 3 you can still but in something worth less) and more the issue that seekers just aren’t wanting for tons of assets, and this is a slow way to build up besides. You’d have to get this to trigger multiple times and then what are you putting in? Fingerprint kits? Cameras? Strange solutions? It’s all so very cumbersome and unnecessary. I agree the other Glyphs are simply better value — Difrakt · 804 3/3/20
This is a card that you gladly take and then try to make it work when you gamble with Shrewd Analysis and it makes you take it — liwl0115 · 14 3/3/20
I agree that this card is a bummer. Such a cool concept but there are so many barriers to making it good. Even if you succeed on all three very difficult tests, you only gain two actions and maybe six resources? — housh · 102 3/4/20
liwl0115: True, this card still has a place in the decks of those unlucky enough to grab it with Shrewd Analysis XD — Zinjanthropus · 97 3/5/20
There's a cool future use for this card in a Daisy deck with Summoned Hound, it allows to play the Hound without shufflingits weakness — mogwen · 210 3/6/20
@mogwen: Marie Lambeau can also take the Markings of Isis / Summoned Hound "combo" — Zinjanthropus · 97 4/7/20