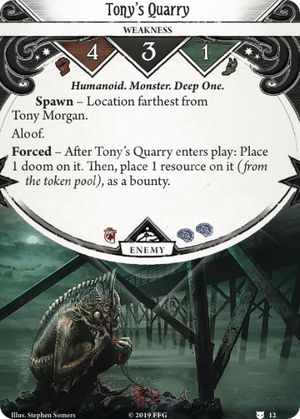 Another enemy weakness, which are usually pretty tame. Looking at the two elements, the effect and the discard condition, we get:

The effect: An enemy that needs killing, which is, ironically, just what Tony likes to do. It even comes with it's own bounty, so Tony can engage it for free. It's 4 combat, which is stronger than most enemy signature weaknesses, but Tony should be prepared to dish out 3 damage to such an enemy, and if he's using Tony's .38 Long Colt, it boosts him and rewards him for the kill. It would be a signature asset if it didn't come in with a Doom on it, which makes it a weaker Ancient Evils that you can cancel if you are fast enough or if it gets drawn during the Witching Hour. It has the usual "loophole" that any investigator can deal with it, although the Quarry's Aloof keyword makes that less appealing than some of the "on the board" weaknesses. If you are on a small map, killing this maybe a turn and change. In a larger map, you might just want to take the Doom hit or deploy cards like Nimble (although Tony will need some boosts before that's going to happen) or Elusive to get close, if not in, the space.

The discard condition: Kill it, if you don't feel like ignoring it.

Taken together, this is a below average signature weakness, which is almost more a benefit, except for the slim possibility of Dooming out a scenario.

LivefromBenefitSt · 626
"On a big map, lose a turn. Below average" — MrGoldbee · 1046 2/3/21
Compared to "get a trauma?" Yes. You're a tough audience. — LivefromBenefitSt · 626 2/3/21
For whatever it's worth, yeah, giving a clean linear rating to cards will almost always be impossible in a game as multidimensional as this. But I'm finding the actual evaluations of the weakness effects & discards to be educational & helpful for deck-planning. Keep it up! — HanoverFist · 346 2/4/21
I agree with the effort but I find @LivefromBenefitSt's reviews of the signature weaknesses quite contentious. Comparing this review to Smite the Wicked that's rated as above average, for example... — suika · 7598 2/4/21
Losing a full turn can mean losing the scenario, which can have consequences ranging from immediately losing the campaign to adding additional weaknesses to your deck, or to take trauma anyway. There are scenarios where you can afford to lose, but even in such scenarios losing can easily translates to the team losing out on a VP they would have otherwise gotten, which would be a 4XP swing. In contrast, trauma is bad only if you repeatedly take the same trauma to a low base stat. That doesn't usually happen! The chances of Smite the Wicked causing a trauma is far less likely than the chances of Tony's Quarry causing the team to lose a turn. Zoey can even decrease the chance of Smite the Wicked coming up late if she digs through her cards during spare guardian turns and plays Daring/Overpower/Glory, while Tony can't effectively do that, since the window to dig for his Quarry during the Witching hour is so narrow. These reviews makes me wonder if I'm playing very differently from how LivefromBenefitSt plays. — suika · 7598 2/4/21
In this case I actually think Live is on the money. This is one of the easiest enemy weaknesses to deal with. I can only think of Graveyard Ghouls as less of an issue. — StyxTBeuford · 12436 2/4/21
The reason this one isn’t so bad is because 1. If you dont care about the doom, then you completely ignore it and it cost you nothing (aside from a draw) and 2. If you do care, the chances are pretty good you have the time to kill it before the doom matters. It is at worst Ancient Evils and at best an extra bounty for Tony (and a way to trigger card effects like Glory or Evidence!) — StyxTBeuford · 12436 2/4/21
In terms of actual actions forgone for a weakness, this still ranks up quite high no matter which way you resolve it, either in terms of move actions to/from the Quarry, or from the actions lost to the doom advancement. I agree that this isn't that bad on average because the action cost is deferred rather than paid immediately, and sometimes it just spawns close by or where you want to go anyway. But the worst case scenario is the same as the worst case scenario for an Ancient Evils: triggering an untimely Agenda advancement due to doom on the board or on Arcane Initiates/Renfields, which then leads to a scenario loss. It's not so bad. But it's certainly worse than most other signature weaknesses! — suika · 7598 2/4/21
Compare, for example, his rating of Siren Call as "Average" despite it costing 2 actions to remove, when Quarry will cost at least 2 actions. — suika · 7598 2/4/21
Honestly I think it’s below average. Maybe if there’s more threats on the board, but this is kind of like Call of the Unknown sans reshuffle. Just as Ursula will use her ability on a location without clues to satisfy the weakness, Tony can usually find a spare engage action he wouldnt be able to get on some turn otherwise. So you don’t have to pay too many actions to kill it, and Tony has the best action economy in the game. I think sure it costs a fair chunk of actions, but the fact that it plays into what Tony gets benefits from anyway makes the net cost fairly low. — StyxTBeuford · 12436 2/4/21
Maybe I'm just traumatized from the time this derailed us in Essex County Express. — suika · 7598 2/4/21
The doom effect of this card is more like an Acolite than an AE. Because it can not advance the agenda it will often NOT loose you a turn. Unlike "Dark Memory", which will always do so, if you play the card. Heck, the quarry is even less thretening than an acolite in that regard. Because, if you can ignore the doom on it, it won't trigger "Mysterious Chanting". Regarding "Smite the Wicked", I agree, this weakness is not the worst. But Zoey is beefy enoght with her 4 willpower and 6 sanity. Roland, the wimp, with 3 will and 5 sanity is a different story. I find his weakness on par with "Doomed" in 8+ scenario campaigns. — Susumu · 127 2/4/21
What if you draw Quarry during upkeep tho? — MrGoldbee · 1046 2/4/21
Honestly, re: the ratings, I think some of us as reading "an average signature weakness", but LiveFromBenefitSt often means "an average threat". I think most of us agree that signature weaknesses aren't really that bad, especially compared to the encounter deck. I'd rate this as an average weakness, which is an ancient evils in the worst case and a dead draw in the best case. — Hylianpuffball · 11 2/4/21
1

The easiest way to handle this weakness is that you draw this card at the round when the agenda will be advenced like Arcane Initiate. Lucky Cigarette Case (3 level) is the good way to find this weakness. Also, some cards help you to find this card; sadly, he cannot take Rook for that.

Otherwise, you commonly want to defeat this enemy because of 1 doom. Here are some good cards to handle this. Note that he may want to deal 1 damage because most weapon has 2 damage (Long Colt, Switchblade, Mauser C96, .45 Thompson, Knuckleduster...).

As far as weaknesses go, Tony's Quarry is on the mild side. 4 fight would be an issue for many investigators, but Tony fights at 5 right out of the gate and often goes way beyond that. 3 health is pretty average and means that most set-up investigators can take care of this monster in 2 or even 1 action(s). An evade of 1 is laughable and 1 damage is standard. 2 horror is a bit scary since Tony has low sanity but as he can reasonably kill this in 1 turn, that often won't be an issue.

The biggest problem with this creature is that it spawns with a doom on it. That, admittedly, is pretty bad. Worst case, you draw your weakness with not enough time to go hunt it, and it costs you AND your fellow investigators an entire turn by prematurely advancing the act. Also, depending on the scenario, "furthest away from you" could mean in a place you can't reasonably get to.

However, since TQ gets a (free) bounty on it, you will have a bit more leeway in going after it, since you can engage or fight it for free. This also means that killing it gives you a free resource for your trouble. And if the act was about to advance anyway, this is essentially a monster that doesn't do anything beyond camp a location.

All these things considered, I think this signature weakness is not one of the weakest in the game, but it isn't far off. I would be more concerned with Tony's sanity and low willpower if you were to play him!

Cpt_nice · 25
In low player counts, that doom isn't worth too much. If it takes Tony more than three actions to move to it and kill it, you are barelly breaking even.... — LivefromBenefitSt · 626 12/1/20
Yeah, I was thinking strictly in terms of larger player counts — Cpt_nice · 25 12/1/20
It being traited Deep One could be helpful in the Innsmouth Conspiracy, since most (all?) other Deep One enemies do something specific and mean that Tony's Quarry doesn't do. So that's kinda fun too xD — bee123 · 24 12/1/20
It's a weakness that looks much scarier on paper than it is in practice. Sometimes it'll spawn on the witching hour, which means you can totally ignore it. Sometimes it'll spawn early in the agenda, giving Tony plenty of time to work his way over to kill it. Certainly now there are many cards that can help Tony hunt it down faster, notably RIghteous Hunt which will conveniently also add 2 bless tokens to the bag (Seeker splash has quite a few move options as well). It's at worst a doom, and at best it can net you an extra bounty to place on something if you manage to kill it with your Long Colt. — StyxTBeuford · 12436 12/1/20
I've lost Agendas to it a few times! — MrGoldbee · 1046 12/1/20
For me the best answer is ... Dynamite blast. When I'm lucky I can even place it in a location with an other enemy I want to kill. Killing Tony's quarry and Josef Meiger in a single dynamite blast and then "Let God sort them out ..." is always very fun and satisfying ! — AlexP · 155 12/2/20
Mostly I agree, but anytime a weakness can literally end the game with no chance to react, I have to give it some respect. This can do that, but usually it doesn't, and your team can prepare for it pretty well, so it's not so bad. — SGPrometheus · 514 12/2/20
I'd give this weakness more credit, not every team has the luxury of just letting their main fighter spend 2 turns running of fighting a fish man instead of dealing with the enemies that are spawning on them. In a four player count (barring dynamite blast) this is a minimum of 4 actions and probably some ammunition for Tony to reasonably deal with, more if you get unlucky. Not to mention if you don't kill it and it advances the agenda you effectively lost around 12 actions. Unbearable? no, but anything that threatens to place doom on the board isn't something I'd call mild. — Vultureneck · 71 12/12/20
I mean Tony does have that luxury most of the time. He will get the free action to engage this thing, and then he just needs to hit it twice (usually). The biggest risk on it honestly is missing a shot and having it hit you for 2 horror while you're still engaged. 4 player teams might get swamped before this ends up being favorable to clear, but at worst it's just an ancient evils in an investigator who bleeds fights actions- the trade off for just taking this as an ancient evils (worst case) is well worth the tempo Tony gives you. Tony is an amazing fighter. — StyxTBeuford · 12436 12/14/20