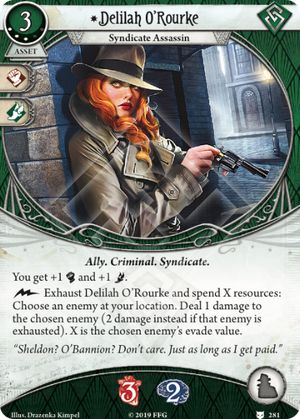 Protip: enemies exhaust after attacking. As such, you may want to trigger her during the player windows that occur before the readying of the enemies, namely between steps 3.3 and 3.4, and between 4.1 and 4.2

jd9000 · 67
This comment right here. hot damn. — Difrakt · 1166 4/8/20
Good point, though it’s hard to setup if the target didn’t spawn at your location or you engage another investigators enemy with your last action — Django · 4286 4/8/20
Sry i meant if the target DID spawn at your location. — Django · 4286 4/8/20
the problem with this is that somebody needs to be taking an attack for this to work. admittedly taking hits isn't that big of a deal, but i don't think you need to for Delilah to be good. that being said, guardian Tony can take Dodge, and probably likes the static +1 combat Delilah gives him. — Zinjanthropus · 211 6/1/20
5

One of the two incredibly strong Rogue cards added by Where the Gods Dwell. Strong soak paired with 2 attributes and a damage ability - this is so strong, that you have to really argue why you might not include this card. Rogue allies always have been pretty good so far, with arguably Lola Santiago being one of the strongest with the powerful resource generating abilities of a Rogue. Delilah O'Rourke is basically the final brick to seal Leo De Luca's fate in Rogue decks, since with Dario El-Amin, Lola Santiago and now Delilah O'Rourke to compete for the ally slot I don't see Leo De Luca in my decks. Anyway, especially with Finn Edwards free evade this is so incredibly strong especially when considering the evade value of the most enemies in the game. I did not count the absolute values here but my gut feeling is that most hunting enemies with high health and fight have low evade values.

thakaris · 187
I just finished The Boundary Beyond in TFA with Finn and Delilah and she is as awesome as you can imagine. Lone Wolf almost sustained her Assassin costs each turn. I disagree a little that Leo is out of Rogue decks at any point in a campaign. Delilah is another great option but Leo is still the best combo with Charisma out of most options. It would be interesting to see what kind of combo you could pull off with Lola and Delilah. Somebody would have to have a ridiculous economy although that is possible if you can't Paint Hot Streak with Sefina a couple of times or Lone Wolf Jenny with a pair of Hot Streaks. Dario is a poor pairing with either imo since you will spending resources like crazy. The Cat Burgler will likely be totally forgotten due to yet another fantastic Rogue ally. And the Cat Burgler is really strong himself. — TWWaterfalls · 850 3/13/20
5

This card is a Sneak Attack on tap, it gets expensive to run but sure enough but with a relatively basic resource generation engine you can trigger her most rounds. Typically evade values are a bit lower than fight values and the vast majority of threats have an evade value of 2 or 3. A card like Lone Wolf will make you just enough resources to be triggering Delilah O'Rourke repeatedly.

To get the most from Delilah O'Rourke you need to be evading, not a problem for high characters like Finn, "Skids" O'Toole or Winifred Habbamock. Finn Edwards in particular with his free roundly evade can kill a minor enemy before he even spends an action! Even if you dont evade though, nailing something with an automatic 1 damage can be so very very helpful, say for example to put a point of damage on an odd-health opponent, also dont forget that there are several 1-health enemies that an angry Delilah O'Rourke will make short work of!

Oh, right, did you notice that she also buffs two stats and has some tank? What IS this crazy value?! Fighting with tends to be expensive, so there's a little anti synergy with her ability, a cheap combat method like Switchblade or Sleight of Hand + Lupara or other inexpensive weapons is recomended (like .18 Derringer for Finn, Enchanted Blade for "Skids").

Between Lola Santiago and Delilah O'Rourke characters sure are spoilt for choice.

Tsuruki23 · 2324
Delilah works very nicely with Hatchet Man by the way. You could make Delilah your main means of damage in a deck if you really want to. — StyxTBeuford · 12738 4/3/20
You don't need to be evading to deal 2 damages with her though: trigger her during the upkeep player window for example, where the enemies will be exhausted from their attacks. — jd9000 · 67 4/7/20
@jd9000 Wow, that's a good point. Nice call. — SGPrometheus · 685 4/7/20
You could do that, but having to wait for an enemy to attack you first is not ideal without cancels like Dodge. Still might come in clutch every now and then, but I wouldnt rely on that. I definitely still think it’s worth evading. — StyxTBeuford · 12738 4/28/20
I'd go evade. You can make it very profitable with 1 or 2 copies of Pickpocketing (2) and Lucky Cigarette Case. This is especially good with Winifred. With her innate card draw, 5 agility, and great rogue ? skills, she can pretty reliably get 4 cards and 2 resources every time. After milking an enemy for a few turns while investigating with Lockpicks, she can kill them off with Delilah and move on to the next thing. — Zinjanthropus · 211 5/17/20
2

I used Delilah O'Rourke in my Finn Deck playing the first scenario in Guardian of the Abyss and she was uber powerful. Without her, perhaps the scenario would be impossible to beat. We played as a three ppl team (Ursula - Leo - Finn) and we won the big boss in the last round before the last agenda progresses! From those damage, some was Delilah's. Combine with Hatchet Man and you can easily make 3 damage without even use bullets.

Sotosprotos · 79
Yeah, Delilah is super good. In some ways she's even better than Lola. Not in a vacuum, necessarily, but considering that Rogues have Lockpicks to nearly guarantee clues. — Zinjanthropus · 211 5/22/20
I’ve played this scenario twice and Neith always seems to last till the final turn. Sometimes the final pull. — MrGoldbee · 1297 5/23/20
1

Stealth or Anatomical Diagrams + Delilah = free cultist killer! Finn is wild with her! To finish Elites - Sawed-Off Shotgun with Sure Gamble Rouges are too cool! You can handle this game, man! This guy has grown so much through Dream Eaters

ambiryan13 · 156
I don't think that works with stealth. AFAICT Stealth just reduces the enemy's agility for the duration of the test. Also it does not exhaust the enemy, so you would only be able to do 1 damage (which is enough for Acolytes, but not for e.g. a Wizard of the Order) — Zinjanthropus · 211 5/20/20
Reducing it for the duration of the test is enough because you can trigger Delilah during one of the two free trigger windows during the test. But yeah, it does only deal 1 damage that way and makes it take an action unless you’re using the upgraded Stealth. — Death by Chocolate · 1229 5/21/20