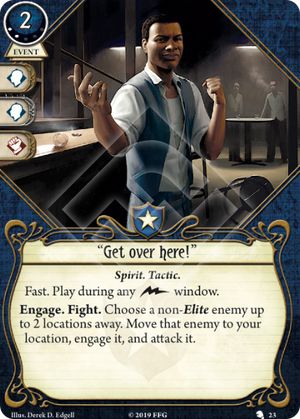 Yorick readied his shovel. His coat was in tatters, his beloved teddy bear ripped into shreds before his eyes... And the unquiet dead of prehistory had begun to surround him. It wouldn’t be a fun fight, even if he wasn’t bleeding internally.

“Why don’t you take on a real man?” yelled the pugilist from two blocks and 1000 years away.

The monsters from his nightmares turned...and charged. The gravedigger took out some folk medicine, and smiled faintly at the sound of skulls hitting the pavement.

Do we think playing this card would provoke an attack of opportunity? I'm thinking yes since it's an action that counts as an Engage (as well as a Fight) and Engage actions do provoke and thus playing the multi-type card does get you hit by enemies already engaged with you. That is also counts as an Fight action doesn't save you.

krish · 34
I think if you aren't engaged with an enemy already, that would be the same as engaging an already engaged enemy and then fighting it as a single action — brkndevil · 1 5/31/20
It is Fast, so no. — duke_loves_biscuits · 851 6/6/20
As duke_loves_biscuits noted, it is fast, so this question is a moot point for the level 2 version, but the level 0 isn't. A multi-type card won't get you hit because AoOs happen when an investigator "takes an action other than to fight, to evade, or to activate a parley or resign ability," The fight keyword makes this an action taken to fight (among other things) and thus it wouldn't provoke an AoO. — Death by Chocolate · 581 8/29/20
0

Less a review, and more of a note/question.

Similar to Deciphered Reality, It's worth noting that this card doesn't have the world "instead" or "but" on it. This means that the latter half of the effect is not a replacement effect, but an additional effect. Is that accurate? I believe that means that this allows you to Engage and Fight something that's already at your location. After resolving that, you could then choose an enemy up to 2 locations away, move it to your location, engage it, and attack it.

Is that accurate? If so, this becomes even better than it appears at a glance, giving you an opportunity for two separate engages and attacks, or two attacks at the same target. This adds a lot of flexibility as a fast action in exchange for the cost - especially since it means Nathaniel Cho will potentially deal up to 3 damage with it.

If that changes on release or a ruling clarifies things, it's likely still a reasonable card. However, there might be even more power in it than one expects at a glance.

Ruduen · 435
No, the rules state that bold action designators perform the rules action, modified by the card ability. It's clear I believe from context that the card text is modifying Engage and Fight and not adding an additional effect — tessarji · 1 7/31/20