"Murph, you know full well that The Rat would snitch on anyone, at any time, for anything, truth be damned if the price was right."
–Jason Marker, Investigators of Arkham Horror
Tiziano Baracchi
Tejedora del cosmos #326. 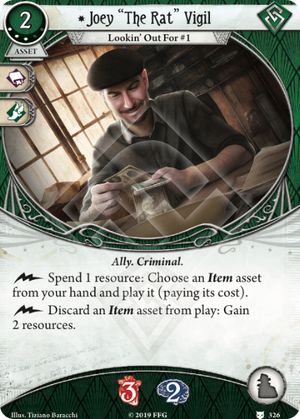 I think Joey "The Rat" Vigil was the most unusable rogue card in the game until this version of him appeared in weaver of cosmos. Now, "The Rat" is one hell of a card, especially for Tonny Morgan. It is not only the cost that is reduced (4 to 2) but also a new fast ability that is added (Discard an Item asset from play: Gain two Resources) This new card gives a new refreshing strategy to rogues to get money super fast by discard assets from play that have no charges/supplies/ammo and play a new one (or even an exact copy of the same card from you hand) by paying the cost plus 1 resource. And it is fast! This opens a whole new world for rogues, as they can now explore a whole new bunch of cards that where never used. Such as Colt Vest Pocket. Also "The Rat" can create some sweet combos that can change the game drammaticaly - I will explain what I mean later on. I play the Dream Eaters B Campaign with Tonny and Mandy. Tonny is an amazing investigator with insanely number of actions and he is heavily combat oriented. Some weapons such as .41 Derringer and Switchblade are essential for him and other such as Chicago Typewriter not so much. He has also 2x Tony's .38 Long Colt. In his collection of guns, I have added 2x of Colt Vest Pocket and using the ability of Rat, this card has now a meaning, because it is a gun bomb which is used normally for 3 attacks (maybe 4 if you put a bounty in an enemy) and before discarding it at the end of the turn, you just discard this asset and get the money back like you have never played it. The +1 damage is sweet and the bonus +1 strength gives a great 6 to handle weak enemies like Rats, Zoogs and overall enemies with Swarming. With this combo you won't need to use your best arsenal against them and you keep bullets for the fatties. Think Rat as Sleight of Hand, but with a reward. The advantage of Sleight of Hand is that it gives you the asset again in your hand so you can circle it again, the advantage of Rat is tha he gives you resources. You can choose which scenario is better for you or you u can use both because Rat is an unlimited source of Sleight of Hand. This can literally save you when you draw an encounter card and you are low on ammo. Also, another thing is that if you want to play a new asset that takes a slot that is already occupied, instead of discard it and get nothing from it, you can use Rat's ability and benefit from both cases - get 2 resources and play this asset fast! Finally, a great combo with Rat is to circle a gun which has Well-Maintained. Just put this sweet fast card underneath the gun and when it is out of ammo, discard it, get the 2 resources and then take the gun back to your hand, to play it again (fast or not) or even commit to a test. And the best part for Rat is that both his abilities can be used UNLIMITED in the turn. You don't exhaust him!!! Combine him with Charisma and Delilah O'Rourke and Tonny becomes a killer machine!

Sotosprotos · 78
Add Scavenging 0 or 2 to get discarded assets back into play? — Django · 4146 5/14/20
Scavenging is great card but I think this is kind of situational depending on the investigators. I am not sure if there is an rogue investigator who has access to level 2 scavenging. Tony can get only the scavenging 0 level, but if you want to include this in your deck, you have to add #streetwise in order to benefit the most from this card. For the heavily strength oriented investigators, investigation actions are kind of limited, not to say forbidden, except if you play some events. — Sotosprotos · 78 5/15/20
Take note that Preston can take up to lvl 2 survivor cards. He also has access to items that cost 0 (cherished keepsake, and leather coat). Talk about free money for Delilah, Lola Santiago, and streetwise — jdk5143 · 96 5/15/20
@Sotosprotos Tony can only take skills and events from his off-class, not assets. — SGPrometheus · 636 5/15/20
@jdk5143 I haven't played Preston yet. My bad! — Sotosprotos · 78 5/16/20
@SGPrometheus I know that Tony gets only skills/events. Did I imply the opposite in the review? — Sotosprotos · 78 5/16/20
i think what SGPrometheus was saying that Tony can’t take level 0 Scavenging because it’s a Survivor Asset. — iceysnowman · 156 5/18/20
Also best cost:soak ratio of any Rogue ally — Zinjanthropus · 206 6/14/20
7

Now that we have an investigator that is Items oriented and has access to The Rat, it is maybe time for another review of the #1.

The first ability is here icing on the cake, we can play another Item , but with Bob Jenkins' passive, we will not need it that much. The only 2 cases when I've found it useful was to play an Item when I was engaged with an enemy and I didn't want to trigger an AoO, or to play Leather Coat/Cherished Keepsake fast for 1 resource right after pulling a scary Encounter Card that involves a test ( for example) to absorb the potential failure.

However, the 2nd ability is a must-have for Bob. It is simple to understand: Empty your Flashlight, your .18 Derringer, your Eon Chart and sell them to Mr Vigil. Then go and Scavenge his hiding place to get them back, play them with your Passive and here you go for another round while having paid for the costs of replaying them. Bonus for Eon Chart that you can use, discard, scavenge and use again in the same round.

This can also work in case you do not have any Item to play with your Passive and you want to turn this un-used action into cash: Play Leather Coat/Cherished Keepsake using your Passive action an throw it immediately. Use Scavenging to get it back during a round when you don't need to scavenge anything else and you're ready to go again.

Finally, there is another series of cards that is worth looking at when considering Joey "The Rat" Vigil: the self-discarding type. We can split them into 2 categories, the ones that involve a test and the ones that do not. If a test is involved during the action that would self-discard the Item, then you have a window to use The Rat before the card self-discards. Other cards do not allow you to do so.

Here's a list of all the cards available to Bob:

Backpack/Schoffner's Catalogue: NO - no Player Window when playing an Item

Gravedigger's Shovel/Lantern/Knife/Tennessee Sour Mash: NO - discard is part of the cost

Talisman of Protection: NO

That is not a lot of cards, but that means that Old Keyring is now as interesting as Flashlight and Bob Jenkins should most likely run both, the Old Keyring on 4+ shroud locations and the Flashlight on less than 3 shroud locations. Colt Vest Pocket is also amazing as you can play it in advance, and whenever you use it, you get your money back right after. This combo makes it the #1 defensive weapon for Bob.

So what about Bob Jenkins and Joey "The Rat" Vigil? They seem like the best buddies to travel to the Edge of the Earth. Bring Dario El-Amin and Leo De Luca in the loop and you have the best undercover criminal gang in the continent.

So, assuming that I'm correct, Joey can discard an Item asset from any Investigator in play anywhere, since unlike Sacrifice, it doesn't say "you control". UPDATE: Sacrifice has to specify "you control" since it's not a cost, unlike this card

This makes Joey a crazy money generator, being able to discard empty guns, spells, and Flashlights at any time in a very flexible way. And since it's not an exhaust, he doesn't have to hold back. Perfect for Tony Morgan who plays tons of guns, and - dare I say it - maybe even better than Leo De Luca.

Nenananas · 207
Got too excited there for a moment: no Spells. — Nenananas · 207 6/4/20
Only the cards controller can use a card's abilities, unless it says differently. But, I expect this to be tabooed because you can get free money with zero costing assets. — jdk5143 · 96 6/4/20
Under Costs: “ Only the controller of a card or ability may pay its costs. Game elements another player controls may not be used to pay a cost.” you cannot discard assets someone else controls to get the money benefit here. It’s useful but not that useful — Difrakt · 1146 6/5/20
it would be kind of funny if you could discard any asset in play. you could really piss of your friend who finally just got their Flamethrower it, or whatever — Zinjanthropus · 206 6/5/20
Welp, that explains the difference between Sacrifice and this card... Thanks @Difrakt — Nenananas · 207 6/6/20
Worth mentioning that you actually can discard certain of other people's stuff with Joey, you just have to take control of it with Teamwork, first. Skids, Jenny, and Guardian Tony can all take Teamwork. — Zinjanthropus · 206 7/19/20
0

Just wondering something about Joey's second ability. It says "Discard an Item asset from play: Gain 2 resources". I'm sure I'm reading it wrong but would that not mean you could discard items in other players play areas? It doesn't say your play area.

JourneysintoArkham · 4
I'm sorry but the review section is not for question; I think BGG is great place to quest the rule. Another review by Nenananas handles this issue. To pay something as the cost, you need to control; thus, you can only discard the item you control. — elkeinkrad · 311 6/21/22
0

huybn9493 · 1
Well Maintained doesn't bounce itself. It returns each other upgrade attached to the card to your hand, but goes to the discard pile. Also there's a million ways to break the game; it's not a competition, so why do we care? — SGPrometheus · 636 5/13/21
A game having a broken combo doesn’t mean the entire game is broken- taboo hits a lot of them, and the remainder you can just choose not to play. All such ways require very specific builds in specific gators, and all of them require XP to my knowledge. If you can’t accept that, then this may not be the game for you. — StyxTBeuford · 12699 5/13/21
and like SGPrometheus said, it's not working anyway. I don't like people accusing the game of "Serious Errors" if they didn`t even read the cards correctly — niklas1meyer · 1 5/14/21
Fast - you play switchblade - lost 1 resource. => fast - you attach well maintained - lost 1 resource. => fast - discard well maintained and return switchblade to your hand. - gain 2 resources. => don't do it again, do it again to a maximum of two times, because you only have one more copy of well maintained. Congratz, you spend 5 XP, 4 cards and 4 resources to fain 6 resources. wow! Much Combo! — PowLee · 13 5/15/21
So can you use his ability to play a card in any player free action window? It doesn’t explicitly say during your turn, but I am assuming because it say ‘play’ you can only do it during your turn? Or can you play yr newly drawn Tennessee Sour Mash in the mythos phase? — gazzagames · 7 9/13/21