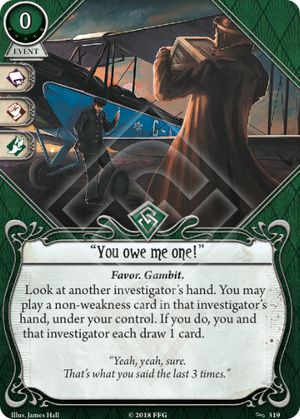 "You owe me one!" is a unique action economy event whose inefficiency is made up for by the possibility of playing a card your investigator might never have otherwise had access to. It's kind of like a mini-Teamwork, but where Teamwork costs you a card, "You owe me one!" replaces both itself and the card you "borrowed". This ends up being action economy because, as an example, had your partner played their Emergency Cache (0) on its own, they'd be down a card and up three resources, but with "You owe me one!" they get that card back, and someone on the team still gets the three resources. It's almost like playing Emergency Cache (2), just with the resources going to a different player.

If this action economy was all it did, "You owe me one!" would be pretty boring. A fast zero-cost event that draws you and another player a card is certainly positive value (and this is comparable to the drawing cards effect of "You owe me one!"), but it is not a particularly powerful effect. Like Teamwork though, "You owe me one!" can allow for all sorts of crazy combos when you play things outside your cardpool. I'm actually not going to delve too deep into the possibilities here as they're as broad as your collection, and many have been mentioned in other reviews (including for Teamwork, so do look at those too if that's what you're after). What I am going to do is try to show briefly why "You owe me one!" is much better than Teamwork for a typical investigator deck, and also how to best take advantage of it and make it shine.

While Teamwork lets you exchange any number of Item and Ally assets and even trade resources, it has always been held back by its cost. "You owe me one!" only lets you swap a single card, but the meager action economy also offered makes a huge difference to the card actually generating an advantage for the team. Teamwork has to enable giving or receiving something really momentus to justify burning an action and a card, whereas you can play "You owe me one!" and be satisfied with even a mediocre trade. Additionally, "You owe me one!" allows you to play any asset or even an event from another player's hand, so can trade some things that Teamwork cannot, and I think this is generally much stronger than resource re-allocation. The cherry on the cake is that, bizarrely, you needn't even be at the same location! Luke Robinson, eat your heart out!

One big downside to "You owe me one!" being used to set something crazy up is that investigator hands are hidden zones, and the rules prohibit explicitly naming or revealing cards in your hand to other players. This is a fairly soft and fuzzy rule so I'm sure if you were determined enough you could work around it, but even sticking to the spirit of it very closely there are still some ways to know what is in another investigator's hand.

Firstly, Norman Withers. Vengeful Hound aside, Norman reveals every card he draws, and if you pay attention you can be sure what kinds of favors are available. Secondly, cards that add bonded cards to hand. If your partner just played their Occult Lexicon, you know they will be holding Blood-Rite. Do note though that, if you play a card like Occult Lexicon with "You owe me one!", your bounded cards don't include Blood Rite, so the book itself is useless to you (as are many other cards with bonds, such as Summoned Hound, which you cannot play with "You owe me one!" because you cannot pay the additional cost). Thirdly, cards that move other cards from non-hidden zones to the hand will also guarantee you targets; Calling in Favors, Sleight of Hand, Resourceful, and Scrounge for Supplies can all tell you a card in another investigator's hand without breaking or bending the communication rule. Searching hidden zones for certain cards can also give partial information; if your partner just played Prepared for the Worst and drew something, you know they have a weapon you could "borrow"!

There may also be some other edge cases where you can reliably infer a card in your partner's hand. "You owe me one!" does not allow you to play weakness cards, so my particular example here is moot. Thank you user SGPrometheus for the correction!

With all those options available, it is entirely possible to co-ordinate your deck with a teammate to make it likely that you know when there is something good to "borrow". Even if you don't do that though, it should be pretty rare for "You owe me one!" to miss entirely unless your partner's deck is all skills and unique allies. Just play it while your slots are open and they have a healthy handsize. You can however also build your own deck to take even greater advantage of "You owe me one!".

Rogues tend to generate lots of extra resources - particularly Preston Fairmont and Jenny Barnes - and you may be able to take and play a card that another investigator was struggling to pool the resources to play. Building your deck to be more generalised also makes you likely to be able to take advantage of whatever you find, rather than being a monster hunter stuck with a Magnifying Glass. Finally, consider the value of combining "You owe me one!" with Crystallizer of Dreams. I already discussed how "You owe me one!" is a kind of frictionless action economy, replacing itself and the card you play with it, which is absolutely perfect for the Crystallizer to grant you effectively "free" skill test icons for the future. Even better if you play another investigator's event that you can also attach to the Crystallizer!

Seems like quite an interesting card with a lot of interactions and not totally clear rules for me, which I hope to clarify here. First of all, it's a Roguish version of Teamwork, but with some advantages. Disadvantages are also present, but they seem pretty minor to me. Let's talk about obvious advantages:

chrome · 11
4. Playing an event ‘under your control’ means you play the event (as if it had been from your hand). Anything that effects the person who plays it affects you. Any tests that happen - you make. 5. Correct. — Death by Chocolate · 906 11/8/19
I'm still unclear as to whether you need to pay the resource cost. Normally cards will specify "paying its cost" when that's the case, but the wording on this card doesn't say anything about that. I suppose it's reasonable to assume that you would need to pay, but it's ambiguous. — Sassenach · 139 11/9/19
They don’t always. Three cards have it as reminder text in parenthesis and italics, but at least as many don’t, as paying costs is an assumed part of ‘playing a card.‘ — Death by Chocolate · 906 11/10/19
you do need to pay all card costs, including resource ones. It's absolutely clear, because the rules specifically say: "To play a card, an investigator must pay the card's resource cost and meet any applicable play restrictions and conditions." Sometimes cards allow to avoid paying the card costs, then the wording "put into play" is used instead of simply "to play". Here are some examples: <a href="03029">Sleight of Hand</a>, <a href="02115">Flare</a>. — chrome · 11 11/11/19
I think it would be more accurate to say that "You Owe Me One!" is neutral with respect to action economy, not awesome. The cost is one card from each player ("You Owe Me One!" and the card that you choose to play from your teammate) and one action, and the result is a new card for each player and a new card in play. The card draw for each investigator simply replaces the two cards that were lost. So the action economy is the same as if you played a card from your hand. — jmmeye3 · 552 12/8/19
@jmmeye3 the card is card neutral and gives you an asset; usually, you would be spending a card and resources to put an asset into play. This makes you just lose the resources, essentially. This is card advantage. — dichromate · 10 4/7/20