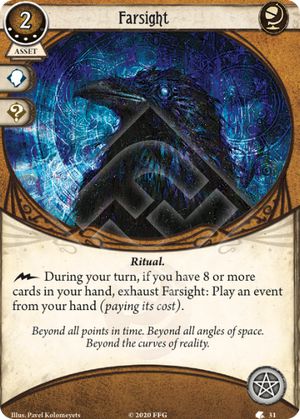 It's a bit pricey at 4 XP, and it takes up an Arcane slot (precious to at least some Seekers), plus requiring 8 cards in hand. Is it worth it?

This card essentially makes one event Fast each turn. About a third of all events are already Fast, but the ones that aren't often trigger Investigate (or, occasionally Fight) actions, so this card could theoretically give Seekers 4 actions/turn fairly regularly and allow for some "no Attack of Opportunity" actions to get things done while under Enemy pressure. Play Burning the Midnight Oil to get 2 resources and maybe a clue, avoiding the Attack of Opportunity, then using the resources to pay for "I've got a plan!" (2) or Persuasion to get rid of an Enemy? As Ursula, getting a "Fast" Seeking Answers (2) to clear a location, then running a couple of locations away for a Special Ability Investigate?

Who likes it? Harvey has the hand size and Draw. He doesn't start with a ton of Events, but there's no reason you can't change that. Mandy has Draw, ways to increase hand size, and access to a lot of Events. Daisy probably doesn't, unless she's going with Spell Events over Assets, and poor Norman can't take it at all. Does Joe Diamond want it to make his entire Hunch Deck Fast?

LivefromBenefitSt · 927
Yes, Joe does. Plus he has the added benefit that playing cards from his Hunch Deck doesn't reduce his hand size, so it is easier for him to maintain his hand size. — Death by Chocolate · 1229 9/9/20
Farsight explicitly plays cards "from your hand", not from the hunch deck — OrionJA · 1 9/9/20
Surely that combos with his "Until the end of the phase, you may play that card as if it were in your hand, at -2 cost," right? — LivefromBenefitSt · 927 9/9/20
For the purpose of playing the cards (and only playing the cards) the hunch deck cards are treated as if in your hand. Thus, for Farsight effect, you can play a Hunch Deck card. Contrast it with Joey "The Rat" not working with Backpack since he says to 'choose an item asset from your hand and play it'. While the backpack cards are available 'to play from hand' they aren't available 'to choose from hand.' — Death by Chocolate · 1229 9/9/20
I would consider this interesting for Joe but I would need to build around this card to an extent in order to have 8 cards. I use some card draw with Joe but usually have 3-5 cards in his hand plus the Hunch. — TWWaterfalls · 850 9/10/20
TWWaterfalls -- Yeah, I'm not sure it's agreat idea for Joe, but it's possible, and, as you say, "interesting." Is it 4/8 XP + however many support cards (Feed the Mind (2) maybe for a "Full Arcane Joe" deck) level interesting?) — LivefromBenefitSt · 927 9/10/20
Maybe Farsight will finally make Guidance playable. — Zinjanthropus · 211 9/10/20
I realised that in a Mandy deck Farsight can be used to re-shuffle Occult evidence in your deck as a free action. Which, in turn will give you chances to have a testless clue during your next search. — AlexP · 218 10/18/20
Farsight Joe Diamond as discussed above is back on the table with the latest faq right? — NarkasisBroon · 9 11/8/20
1

With Occult Lexicon 3 and DES, this card sees renewed use and is honestly overpowered with that. Essentially, every turn you now have a free fast Blood Rite. This is a fast action, three cards and three damage or three resources.

It basically turns Blood Rite into a cryptic research that does damage or generates resources. Basically, a Seeker staple now.